From Fort Hood to North Scottsdale 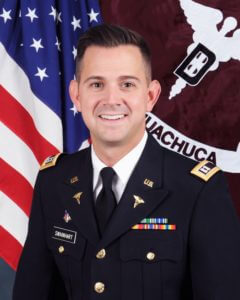 At three o’clock in an early April morning, Captain Samuel R. Swainhart of the US Army Dental Corps received a phone call he would not forget. It was the morning following the tragic 2014 shooting spree that had once again rocked the Fort Hood community, leaving four people dead and fourteen injured. Swainhart, a general dentist and the installation’s forensic dental officer, was called to provide identification of the shooter and victims.

“At that point I was fairly experienced conducting forensic dental examinations and providing proper identification of deceased persons, but never had I been a part of such a high profile and active investigation,” recalls Dr. Swainhart. “What made this case unique was that the Fort Hood Commanding General was literally standing right outside the door waiting to pass the identification up the chain of command.”

Dr. Swainhart was a direct commission into the military after graduating from the University of Kentucky College of Dentistry. He never anticipated becoming involved in forensic dentistry, until his unit commander assigned him the additional duty, which also came with additional training. “During that time I was still performing routine dentistry, but a forensics case would take priority.” Captain Swainhart received the Army Achievement Medal and Army Commendation Medal for his service.

After assignments in Kentucky, Texas, and Arizona, Dr. Swainhart has now transitioned into private practice. His office is located on Carefree Highway and North 60th Street. He is accepting new patients and can be reached at 480-488-7010 or at https://carefreesmile.com

Carefree Smile at Mission of Mercy

What is an impacted wisdom tooth?

Do Dentists Use Mercury Fillings Anymore?